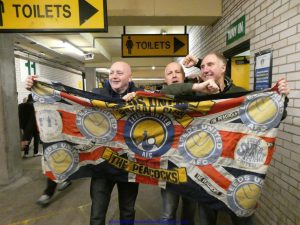 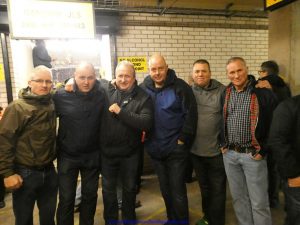 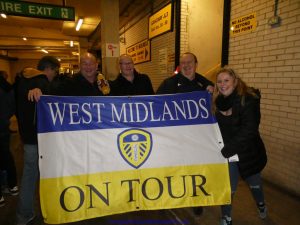 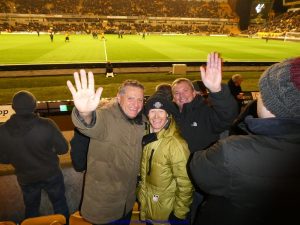 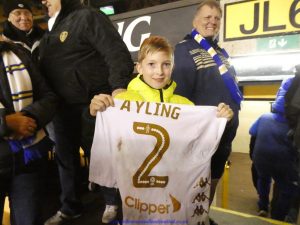 Photos from our trip to Molineux 22nd November 2017

With Alioski on the bench and Roberts coming into the team, it looked like a slight change of formation today. With Dallas going to left back, Struijk back in defence in his strongest position, Ayling back at right back this pushed Shackleton into Phillips’s role. Although recently injured, Phillips lost his gran this week too.

A good run out of defence saw a Roberts pass to Bamford win Leeds a corner that was cleared by Wolves. When all I could think about was the Netto supermarket (long gone) after hearing the name, I knew he would be a pain in the a**e against us today. Another attack by Leeds saw Roberts let the ball run instead of having a go himself, but the chance was lost as no other Leeds player was close enough to pick the ball up. Wolves were very quick once they broke up our attack as they raced out of defence but luckily Dallas put the ball out for a corner. Wolves had their long-range shooting boots on today with the first one saved by Meslier. He was called into action again to save another shot after Wolves made it hard for us to play out from the back, putting us under pressure.

With Lucy Ward ex-Leeds commenting on the game, my heart sank when she said that Wolves hadn’t opened the scoring in 14 games which was later repeated by her colleague. Despite being told that my superstitions don’t decide games, the comments came back to haunt us as it was odds on that would happen! A shot from Raphinha bounced easily for their keeper to gather the ball. As I was thinking Roberts needs to be tough tonight, he was pulled up for a foul but even though their player went down hurt, it didn’t look that bad a challenge. Roberts was involved in some good movements going forwards in the opening minutes of the half. Wolves then had another long range shot that brought a save out of Meslier.

A foul from behind on Bamford saw Leeds awarded a free kick. A great delivery from Raphinha picked Cooper out and his glancing header was straight at the keeper. As Wolves came forward again, their man was all alone on the wing with Ayling coming back from an attacking position. We need to watch that we don’t give them too much space. With their player leaning into Struijk he eventually won a free kick when he ended up on the floor although I didn’t think it was a foul. There was no way he was going to stay on his feet. Leeds came so close to opening the scoring just before the half hour mark when the bottom of the post saved them from Klich’s shot and a second shot from Struijk was saved by the keeper. As Wolves raced out of defence, Meslier was forced into making another great save to keep them out. I was more than happy with our formation today despite Wolves having plenty of attacks.

When the commentator mentioned Robin Cook, I thought who Is he, before realising he meant Koch. Wolves were proving they weren’t a pushover when they got through our defence again as Meslier covered his near post and put the ball out for a corner. Raphinha put some great crosses into the box only for them to be just out of reach of our incoming players. If only we’d got longer legs! Meslier was alert and had to be quick out of his area to kick the ball away. A great throw from Meslier to Raphinha put Leeds on the attack but it didn’t come to anything.  Some good defending saw Cooper win the ball, but as Wolves picked the ball up first, he was shouting at Roberts to track back. Leeds tried coming forwards again and were unlucky it didn’t come off after some good work from Harrison. It had been a very quick half as the whistle blew just after 45 minutes had been played without any injury time added on. It is rare to see that as normally at least a minute is added on. With the score evenly balanced at 0-0 it was anyone’s game.

The start of the second half saw Wolves closing us down well making Leeds work around them patiently to start an attack. They continued to keep forcing us back which is something I don’t want to do if I can help it, although it can’t be avoided at times. At one-point Ayling’s run with the ball took him right over to the opposite side of the field. Harrison was bundled off the ball, but Cooper won it back only for Wolves to come at us again, but their shot was over the top of our goal. Struijk made a couple of great passes across the field and Raphinha was also displaying his skills with a great ball to Bamford. Ayling then followed suit with a great pass that won a corner. Klich won a free kick when hit on the back of the head and their keeper made a point blank save from Cooper to prevent Leeds taking the lead with Bamford’s follow up shot cleared off the line. How cruel then to see Wolves run to the other end, hit a long-range shot that bounced off the corner of the crossbar and hit Meslier on his back and into the net. The jammy sods and it shows what a bit of luck can do; I was gutted for Meslier.

Hernandez came on for Shackleton as Leeds were awarded a free kick. A fantastic cross from Raphinha which Cooper got to, saw their keeper very lucky to put the ball out for a corner. After having so many years where we have been dire at free kicks, crosses into the box and corners, it was nice to see that they were causing problems for Wolves now with Raphinha taking them. As we are getting stronger in that respect, the goals will come in time. When a perfect through ball to Bamford saw him run forwards and smash an unstoppable shot into the net, it was disallowed for offside. Even though the VAR line showed him level, he must have been offside by a fingernail! That hit home hard and yes it may show differently from another angle, but having the attacker given the advantage as used to be in the rules is sorely missed. Wolves were certainly riding their luck today to still be in the lead. Our goal being disallowed made me so angry as that would have been game on and a chance for us to win the game.

Costa and Alioski came on for Klich and Harrison before Wolves subbed their earlier substitute for an injury. A good through ball from Raphinha was just too long for Roberts to reach, the latter then winning us a corner after a great ball from Hernandez. A shot from Roberts hit their player on the head and he went down in the penalty area which stopped our attack. With that Wolves were given the advantage as new rules meant they were given the ball when we had been in possession of it. That to me is all wrong. Good defending from Struijk meant Wolves won a corner but as they were time wasting taking it, their man was booked. With five minutes of injury time to play Wolves were keeping us in the corner at our end of the field. In the closing minutes Wolves had all the luck again when Roberts received a great pass from Raphinha, and the keeper saved the shot with his feet.  If only he could have lifted the ball over the keeper. With our final chance in the game the keeper saved a header from Raphinha meaning Wolves won the game with that earlier lucky goal. If the original shot had gone in, that would have been easier to bear as it would have been a great goal. To get the luck they did for the shot to rebound off Meslier’s back meant Leeds were unlucky to get defeated. We played well and deserved a draw which would have been a just result.

With our games against Southampton on Tuesday then Aston Villa next Saturday having a 5.30pm kick off, I’m hoping we can get back to winning ways. LUFC – Marching on Together!