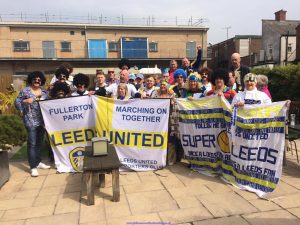 What I would have given to visit another new stadium tonight following Leeds United. At least things are getting closer to us fans being allowed back at grounds in some capacity. To say the powers that be are now looking at the integrity of the Premier League when they weren’t bothered before Christmas when some clubs had the luxury of some fans in attendance, makes me laugh. They didn’t bother about that, then did they? We will see what happens next. After reading the latest newsletter from LUST the Leeds United Supporters Trust, it was good to read that the away season tickets showing the loyalty of our support will be honoured. Getting back to home and away games will be relished and cannot come soon enough for me.

Leeds started the game well and a great Phillips ball to Costa saw him running down the wing and win us a corner. As West Ham cleared the ball it came back out to the left, but Roberts couldn’t get the better of their defender to get a cross in. A powerful shot from Costa went over the crossbar. As Roberts hammered the ball into the net for Leeds, I thought we’d scored a perfectly legitimate early goal only to see the flag go up for offside which was confirmed by VAR. I thought the offside rules were from when the ball was kicked not when the ball was received but with rules forever changing, I wasn’t sure if that was still the case? Even seeing VAR didn’t convince me that the goal was offside although my hubby thought possibly Bamford got a slight touch to the ball. Raphinha was involved in a good bit of play and in another move won the ball straight back after losing it. Raphinha then crossed the ball for Bamford to put the ball into the net but it had already gone out of play. At one point we were too close for comfort when playing across the back four, but I would rather play out from the back. A short while after it proved my theory when the ball was kicked long from Meslier but was immediately picked up by West Ham to put them on attack.

The game turned on its head when West Ham were awarded a penalty when Ayling caught their player. Meslier was very unlucky as he saved the initial penalty, but West Ham were quicker off the mark than our players and put the rebound into the net to give them the lead. Maybe our players just assumed they were going to score but West Ham being in the lead was against the run of play.  Raphinha put in a good cross that was caught by their keeper. West Ham were awarded a free kick in a good position after a Cooper foul, with their players lining up to take the free kick talking behind hands and shirt seemingly so no one could lip read them. A deflection won West Ham another corner and they then scored from a header in between Llorente and Ayling after losing our markers just before the half hour mark. It was an end-to-end game, but luck had deserted us as they had another shot over the bar. There was no doubt in my mind that we would be making changes at half time today as our midfield was non-existent with West Ham running through us easily at times. I was frustrated with our disallowed goal as that counting would have made a difference to the game. A long-range shot was put around the post from Meslier. With Ayling pushing up so far, he kept getting caught out on the wing when West Ham attacked us. Just before the whistle blew West Ham won another corner and saw the ball rebound off the post and cleared by us as Leeds went into half time losing 2-0.

At the start of the second half Alioski and Harrison replaced Klich and Costa with Dallas moving into midfield with Alioski at left back. An early cross from Leeds was easily caught by their keeper. A fantastic through ball from Llorente to Bamford was a great chance but went just wide and could have put us immediately back into the game had it gone in. Phillips ended up in the book, but he got the ball first. A fantastic shot from Raphinha with his back to goal was tipped over the top from their keeper before a West Ham chance saw their shot come back off our crossbar. Raphinha was shining with another good run and his shot was narrowly wide. Rodrigo replaced Roberts with half an hour left as Leeds kept going forwards in an end-to-end game, with a great pass from Harrison to Alioski on the wing. His cross saw Raphinha’s shot saved by their keeper.  When Raphinha went to take a corner won by Rodrigo, the contrast to West Ham corners was noticeable. They constantly stood in front of Meslier piling pressure on our defence whereas we don’t put any pressure on their keeper as he was surrounded by his own players.

After another Leeds corner didn’t come to anything West Ham went on the counterattack, but Dallas got back.to defend well. Another attack by them saw Llorente miss the ball and bring their man down to give West Ham a free kick in a good position on the edge of the box, but luckily they put the chance wide. Dallas made a good run forwards but was unlucky with the final pass picked up by West Ham. Another great chance for Leeds to pull a goal back saw Bamford hit the ball over the top of the goal after a great pass from Raphinha. What a shame he couldn’t have put the ball in the net like he did in the first half when it didn’t count.  We have got to take our chances and getting one goal back would have given us that chance to get something out of the game. They got booked for kicking ball away as Leeds never gave up and were still attacking. Rodrigo had a shot over the bar when maybe Ayling was in a better place to the right of him, but he had to try. We only needed that chance, but West Ham got the luck as they cleared the ball off the line after a great cross from Ayling. They had a long range shot easily saved from Meslier before some strong play from Phillips saw his long shot well wide.

As the whistle blew for full time which saw Leeds lose in London, the hoodoo strikes again! We will have to learn to be clinical and put our chances away as in this division, you do not get a second chance at it sadly. The Chelsea game at Elland Road at the weekend will be an early lunch time kick off with games coming thick and fast. Keep fighting Leeds as you did today, and it will come good in time. LUFC – Marching on Together!