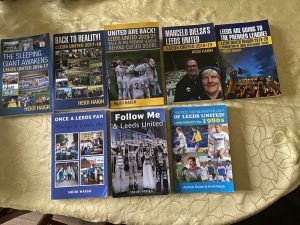 Remember to use the code HAIGH25 if ordering direct from my publisher JMD Media to receive your discount for any of my books or others on the site.

As usual a big thank you to everyone for their support in buying my books which is greatly appreciated including Robert, Martin, Harry plus those who have already got their orders in or who have ordered it directly from my publisher or Amazon.

Last Friday I attended the Centenary Whites do at the Irish Centre which was once again it was an excellent event with lots of different acts too. It was well worth going to and enjoyed by all of us in my family group.

It was a cold morning with ice on my gate as I set off from home for the coach to Spurs. After a stop at Muswell Hill again we arrived at the ground in good time for kick off luckily getting dropped off nearby. The challenge after the game was finding out where we had parked but it was disgraceful that once again there was no provision for getting our disabled fans back to them. That is one thing the Premiership is severely lacking, any compassion for the ordinary fans that follow their team which is unacceptable in this day and age.

After the bag searches, then being searched myself, with some of our stewards having the joys of asking for covid passes where they received some friendly abuse from me before a final wave of a metal detector which made loud noises from my phone, I made it to the turnstiles. That was the easy part getting through! There was an icy wind outside the stadium but at least it was warm under the stand where the Leeds fans were in fine voice with constant renditions of the Follow, Follow, song which sounded great.

This was a new stadium to visit despite me having visited White Hart Lane many times before. I was taken back in time to my first ever away game that I travelled to on my own on 29th January 1972, an unbelievable 50 years ago in January, which Leeds lost 1-0 at White Hart Lane. My friend Sue couldn’t afford to go as she was still at school whereas I’d started working at 15. I travelled with Wallace Arnold coaches from Leeds and when we got to the ground, I asked some girls at the front of the coach if they’d mind me tagging along with them. We went in the seats above the Spurs fans at the back of the goal and long-lasting friendships were formed that day that are still in existence now.

Leeds lost the game 2-1 after James getting his first goal for Leeds just before the break on 44 minutes.

The game set off at a cracking pace and a foul on Gelhardt gave Leeds a free kick on the left-hand side of the pitch, which was taken by Phillips and saved by the keeper. Leeds kept racing forwards putting Spurs under pressure before some outstanding defending from Phillips, Cooper and Forshaw won the ball back from Spurs letting know they were in a game. Forshaw saw his shot come agonisingly close to opening the scoring, but it whistled past the wrong side of the post with their keeper at full stretch. Phillips was playing his best football since he came back from injury plus the whole team were doing well collectively which was good to see. Just before the break with many fans having already gone downstairs for half time refreshment queues, Leeds took the lead with a greatly worked goal. Some fantastic play from Harrison on the left wing saw him beat the defender before crossing the ball into the middle for James to score his first goal for Leeds at the far post. The attempt from Forshaw and the goal going into the net have been captured in my photos I’m pleased to say. Going in at half time in the lead felt good as many fans had written us off before the game due to the players out with injuries.

The second half started with Leeds defending deep which invited Spurs to attack us, which saw the ball bounce back off the post after a finger tipped save from Meslier. Leeds raced to the other end with James trying to add another goal to his tally but this time his shot was saved by their keeper. Leeds found their luck holding when Spurs’ next attempt saw Llorente deflecting the ball onto the crossbar before we cleared it. Back to the other end in front of the Leeds fans and two attempts from Gelhardt were saved by their keeper. Sadly, our luck didn’t hold as another attack saw Meslier pulled out of position in an attempt to win the ball and the ball was passed back across the goal for Spurs to equalise. With Spurs players falling down at the drop of a hat it wasn’t a surprise to see them win a free kick just outside the area with the referee keen to oblige by giving it. Sod’s law saw the ball bounce off our wall and onto the post, only for one of their players to be quick to peel off and score from the rebound. That was a bitter blow especially after we had played so well in the first half. Although Leeds kept trying to get forward, we were hitting balls into the air which were easily cleared by their giants in defence as I shouted for Leeds to play to our strengths. Our best spell in the first half was our constant attacking keeping the ball away from them and playing to our strengths on the floor. It felt very futile then as I couldn’t see another way through although James tried once again to get on the scoresheet. As the final whistle blew it was a massive disappointment that we hadn’t got anything out of the game but as always, only the final score counts for anything.

The atmosphere from the Spurs fans was very poor today. They were heard when the game kicked off, after both goals and at the end when they could have been so impressive. As we came out of the ground, we were only allowed left and then in the direction of the coaches although we’d no idea where they were. Our driver had at least told us the road he was parking on so that gave us something to aim for, but plenty of fans took a long time to get there as there was no police assistance in telling anyone where the coaches were. After a long time getting out of London and another M1 detour because of motorway closures, I eventually got home at 12.30am Monday morning. With more ice to be found on my gate, it looks like we are heading into wintry weather this week but hopefully it will have warmed up for Saturday’s visit to Brighton. See you there, LUFC – Marching on Together!