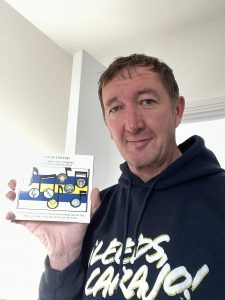 Leeds born actor from Chernobyl, Game of Thrones and The Office star Ralph Ineson, is a lifelong Leeds United supporter & is pleased to be involved in the launch of a unique 3 CD set of terrace songs & chants from the 1960s to the present day.

He said ‘I’ve supported Leeds United all my life & think this is an amazing project. Our club has a long & proud history with a rich heritage of music & humour that is unmatched. It’s great that these chants & songs have been recorded for posterity & I hope every loyal Leeds United fan will support this fantastic project, which will raise much needed money for the Leeds United Academy/Foundation’.

The project has been a genuine labour of love for Heidi Haigh, Gary Edwards, Tony Winstanley & Mick Hewitt, who have worked hard to overcome a series of delays to finally produce this collection. It’s a perfect Christmas present for Leeds United supporters of all ages. Project co-ordinator Heidi Haigh explained the reason behind the CD title when she said, ‘We have all followed Leeds United for over 50 years, home, away, abroad & at friendlies & are still doing so until this day & are loyal Leeds United supporters. Many opposition fans say we only have one song, but the CD’s we’ve produced shows that this is a myth with over 200 recorded! History has been made with this unique project, which is the first of its kind, as we are not aware of any other Fan Group having done this. It has been my ambition to record all the old Leeds songs from the terraces for many years. To see this completed after four years of sheer determination & resilience to see the project through with a group of likeminded Leeds United fans, is a fantastic achievement.’

Heidi’s words are echoed by Gary Edwards, who said ‘Leeds United have long been associated with musical icons. Ronnie Hilton brought us Leeds United Calypso & several other renditions. Barry Mason & Les Reed (composer of It’s Not Unusual & Delilah) brought us Leeds United (better known as Leeds, Leeds, Leeds) which rose to number 10 in the charts in 1972. But the real musical heroes are the Leeds United fans themselves. From the Scratching Shed in the 60s & 70s & who can forget the driving bass sound behind every United game created by the West Stand Paddock with a resounding & constant chant of Leeds, Leeds, Leeds, Leeds. So, sit back & enjoy this collection of terrace favourites spanning well over 50 years.’

Project member Tony Winstanley is also proud to be involved in this amazing project & he said ‘This collection of songs & chants is testament to almost 60 years of Leeds United fans changing the supporting landscape of the previous century. As a 12-year-old I went in the boys’ pen on the Kop. By the time I was 14/15 I was stood on the barriers in the Scratching Shed conducting the singing & in awe of some of the ingenuity showed by people like Phil Dobreen, the Leeds United Minstrel, with his guitar. He inspired many of us ‘youngsters’ to come up with songs & that has continued to this day. ‘We’ve only got one song’ is saying to those that think our anthem is all there is, should look at the history & all its wit, humour & genius. MOT.’

A final quote comes from Mick Hewitt, who said ‘I was born under the Gelderd End, or so the song went. Always fascinated by the shed in my boyhood Lowfields days it was great to become a Gelderd Ender at the start of 1969/70. I stood on the Lowfields on the last game of 1968/9 & watched a fantastic sight of the full ground singing you will never walk alone. Never bettered in my lifetime. We had to be on the Kop early & that’s where old & new songs were learned. Over the years songs were forgotten & I thought before I pass I would like to get down on paper the ones I could remember. One pre-season in 2010 I muted this & a few people showed interest. It grew legs on the Torquay tour & Tony Winstanley’s singing that tour inspired me to start asking the questions. Along with Heidi a driving force on the project & Gary Edwards we took the leap & tried to record what we remember. There are more (some not politically correct) some forgotten or missed. I know there are a lot from the shed days but that may come out of this.

We know it’s not perfect, we know there are other versions & missed songs. Leave any comments with us & we may get an updated version. To everyone who attended the singing & some no longer with us a big thank you. Sit back & enjoy memory lane. Any profits after costs have been repaid, go to the Leeds United Academy/Foundation as per our wishes.’