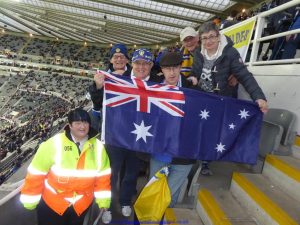 With the Southampton game postponed, the pitch at Elland Road will have been replaced by the time we play our next home game against Everton in February. I’ve seen the sum of £300,000 mentioned with the HT Pro hybrid pitch the same as at Tottenham and Swansea. This is a temporary replacement as the pitch is due for reconstruction at the end of the season along with a new drainage system. Also, Leeds announced further investment into the club by an affiliated entity of the 49ers with the increase of their share holding to 37%. Paraag Marathe now becomes the Vice Chairman of Leeds United.

My stomach had been churning for hours before the game today so I was a little nervous knowing how important a win would be.  In the opening minutes of the game numerous players were injured and then Llorente went down and had to be replaced after 10 minutes. Once again with a comeback game, Llorente has found himself injured. This was a big blow for us especially as he has spent more time on the treatment table than on the pitch since he arrived at Leeds. It would have been nice to see him get a full game under his belt but sadly it wasn’t to be. Hopefully, he was just taken off as a precaution. A fantastic cross from Dallas to Harrison at the far post looked like it would be slammed into the net, but he didn’t connect with the ball right and the chance went wide. Leeds won a few corners in quick succession before taking the lead after some great build up play, when Rodrigo pulled a great pass back across the penalty area for Raphinha on the edge of the box to score on 17 minutes. It was Meslier’s turn to be treated by the trainer after he got a knee in the face and was down on the deck.

Leeds had the most possession and great moves in the first half but just before half time, Newcastle went on a run and won a corner. Meslier dropped the cross but in front of Struijk who shielded the ball to him. Leeds had a couple of good chances prior to that with some great moves and Rodrigo was unlucky not to get on the scoresheet. Raphinha found himself knocked over by Ayling in their penalty area whilst we were on the attack. I was quite surprised to see the referee keep his yellow cards in his pocket as I felt there were a few tackles that warranted a booking, especially the one who caught the back of Raphinha’s ankle. We nearly got complacent when Cooper glanced a short ball back to Meslier that put us under pressure, but Meslier was quickly out to smother the ball. Due to all the stoppages, it was no surprise to see five minutes of injury time added on. Leeds ended the half on the attack and some of the passes cut through the Newcastle defence were sublime, but they battled to keep us out as the whistle blew just when we’d won another corner.

At the start of the second half, Leeds were unlucky not to go further into the lead after a great ball from Raphinha saw the ball rebound off Dallas and into the net, but the goal was disallowed for handball. It was still a stop start game due to injuries, but with Leeds a man down, the referee played on and Newcastle won a corner. The resulting shot from them was straight at Meslier. Just after that Meslier took another knee to his face and needed treatment. The poor lad was certainly in the wars today. Bielsa brought Klich on to replace Alioski on 55 mins and I thought we needed to change things to get back on top. With Newcastle coming out for the second half rejuvenated, sadly for us they scored more or less straight away after the substitution. The goal came from a Leeds mistake when we had won the ball back but then gave it away too easily. Although Meslier got his hands to it, the pace of the ball and with our defence beaten, it meant he didn’t stand a chance of stopping the ball going into the net. Roberts came on to replace Bamford, but Leeds managed to get in front again a few minutes later. A glorious ball once again from Raphinha reached Harrison on the left-hand side and this time he made no mistake and slammed the ball into the net.

Leeds were having to battle as Newcastle upped their game when Struijk took the ball off their toes in our penalty area. Rodrigo sent a fantastic ball to Raphinha and the final ball was just out of reach of Roberts. That had been a good chance. Newcastle won a couple of corners as the final header went over the top of the bar. One challenge by Leeds which I thought was a 50/50 tussle saw their player fall over and awarded a free kick in a good position. Newcastle had certainly woken up this half especially when a fantastic save from Meslier denied them an equaliser. They then ran all the way through us with Roberts having no chance of catching their player, which brought another fantastic save from Meslier. There was no pressure on their player from us but also, we couldn’t bring their player down either in a crucial position. Newcastle won another free kick outside the area and were looking strong down the left-hand side of the pitch towards our goal. Rodrigo was booked for diving; he’d been tackled him from behind and then their player retaliated putting his head in Rodrigo’s face, so he got out of the way! Their player was bleeding in the mouth, but any contact was accidental. I thought Newcastle were the ones being antagonistic anyway. Ayling’s cross was put out over the bar for a corner to Leeds then a deflection from Klich was put out for another one. Raphinha had a header come off their player and caught by their keeper as the whistle went for full time. Raphinha played well today and won a deserved man of the match

That was a hard fought 2-1 win especially during the second half, so getting three points was vital. With the forthcoming Leicester game being on Sunday at least we have a few days for Llorente to recover. LUFC – Marching on Together!