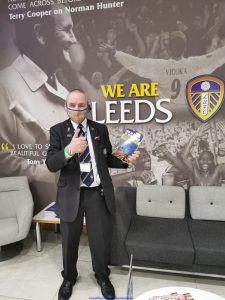 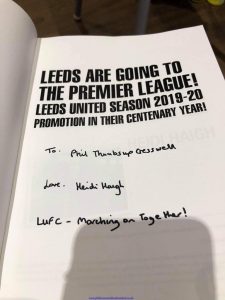 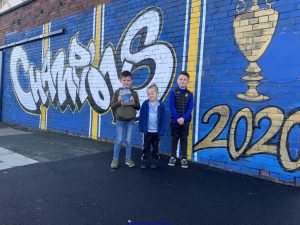 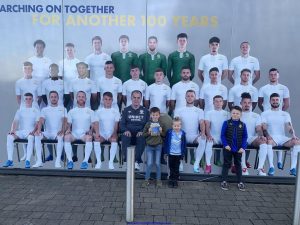 It was nice to see that my new book Leeds Are Going to the Premier League made its appearance at Elland Road before I did. Thank you to Phil Thumbsup Cresswell who took his into the ground and was a good luck charm against Newcastle. Thank you also to Matt Wainwright and Robbie, Oliver and Eli who showcased the book outside the ground. I do miss going there. Photos provided by Phil and Matt.

I attended my first live football game yesterday since the Huddersfield home game in March, watching my granddaughter Laura. It shows old habits die hard as I got carried away at one time and automatically shouted come on Leeds.

Team: Meslier, Cooper, Alioski, Ayling, Harrison, Bamford, Klich, Phillips, Rodrigo, Raphinha and Dallas. Subs: Struijk for Phillips (45), Shackleton for Klich (45) and Davis for Cooper (injured 72). Subs not used: Casilla, Poveda, Roberts, Hernandez and Costa. Leeds lost the game 6-2 after going down to a quick succession of goals but scored two goals with Cooper (42) and Dallas with a cracker (73) being the Leeds scorers. Attendance: Zero, behind closed doors. Referee: A. Taylor.

Leeds got off to the worst start ever being three goals down within the first 20 minutes. Obviously, man u had raised their game. With one they ran through the middle and looked to catch us unawares. Bamford had a great chance, but it went wide. It was good to get a chance to give us hope we weren’t out of the game as I was still looking for a draw at this point. Never give up fighting and still believe Leeds. A draw would be a good result and we can get back in this game although it wouldn’t be easy. There was some good defending by Cooper as they attacked us again.

It seemed to me that the crowd noise had been upped as we don’t normally hear it so loud. Commentators saying that our rivalry only started when Cantona was transferred to them made me laugh out loud. They also said that there may have been some before that showing how silly and pathetic the discussion was showing they haven’t got a clue. My experiences as a fan started in the early seventies but fans who went to away games earlier than I did, had plenty of stories to tell of troubles they endured from their fans before ours started fighting back. They also said that it was horrible that Leeds fans used to congregate outside their hotel when we played them. Poor souls, I do feel sorry for them, not! Surely that can’t be any worse than having sleep disturbed by your children as young babies, six years’ worth in my case.

Cooper made another important interception. They were making sure we did not have the time to settle as Alioski gave a free kick away when he was nearly on Rashford’s back marking him close. With an unchanged team maybe, we needed different tactics to get on top of them especially as we were up against a 10-man defence. Bamford scored but had strayed offside which would have got us back into this game. Instead, they got their third from their goal kick. Bamford was unlucky with a header after a great Klich cross. Believe lads was my cry as we continued to attack and got another corner. This wasn’t a good one from Raphinha although it ended when the keeper saved with his feet, but it turned out Harrison was offside so it wouldn’t have counted. man u won a corner and scored a fourth which Phillips should have defended better than he did. If we had been at the ground some fans would have been clamouring to go to the pub but as a glutton for punishment, I’d have stayed until the bitter end regardless. Leeds fans would have made our own entertainment; we’re going to win 5-4! As it was, I was resigned to an even bigger defeat as Meslier saved when it looked like they were going to score a fifth goal, but the flag was also up for offside. Leeds still hadn’t given up and Cooper pulled a goal back when he headed one home from a better corner from Raphinha in the 42nd minute. Meslier was forced to make another save before the break.

Leeds made a double substitution with both Struijk and Shackleton coming on for the second half with Klich and Phillips off. I’m not sure if it was to do with them both being on four yellow cards or not but at times Phillips did look ineffective as the game passed him by. man u had another good chance just after the restart but put it wide. My hopes were raised when I thought we’d scored a second goal after Raphinha and Bamford combined but it went out for a corner. Just after that the referee booked James for diving when I thought he had given a penalty. Leeds were still attacking and won another corner, but they broke out from our corner which ended with Shackleton blocking the ball. Back to Leeds on the attack and a shot from Raphinha was put around the post from the keeper. Once again man u broke away from our corner and with the ball running for them, they got a fifth goal that went through Meslier’s legs. He had been left wide open so many times today that I couldn’t apportion any blame to him. Cooper was injured but came back onto the pitch before man u were awarded a penalty after Struijk’s tackle. At this point I knew we weren’t going to win 5-4 lol. Again, an idiotic commentator was saying Leeds fans would be glad not to be there. We support the team win, lose or draw and I would much rather be at the game watching it live in the ground than on TV, however welcome my log burner was.

Davis came on to replace Cooper who went off injured with his knee again by the look of it. Meslier saved another chance with his legs before a fantastic goal from Dallas made it 6-2. Leeds were winning plenty of corners today which will do us good as practice makes perfect. From one we had two players Struijk and Bamford down. Again, we had to thank Meslier for a double save to deny them a seventh. He was called into action again with another save off his knee and saving a header on his line. They won the ball from his throw out as we were not watching it and were too slow to react and they could have had a seventh but won a corner instead. After a good attacking move Harrison put the ball wide when in a good position.

It was hard to believe the score line when we kept attacking but it made it easier to forget we were losing. As it was, we were well beaten on the day in a game with end-to-end football that was a good advert for football itself and I will always be proud to be a Leeds United supporter.

As I finish my blog today, yesterday’s government news re Christmas had me sobbing for hours I’m not ashamed to say, as this is my favourite time of the year. Whatever anyone does, stay safe and healthy, but be happy. LUFC – Marching on Together!