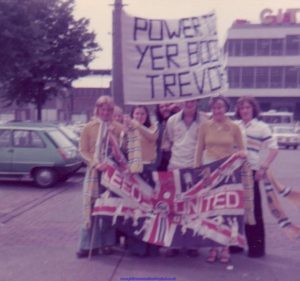 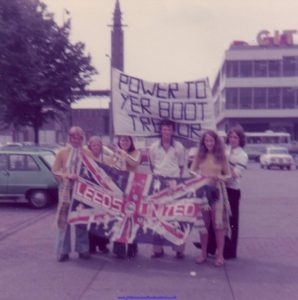 With it being Trevor Cherry’s birthday today I’ve shared a couple of photos taken at the Amsterdam Tournament in 1976 with a banner made by my friend Carole as a tribute to him. Power to yer boot Trevor!

I’m not sure if the wind had picked up in Leeds but if it is anything like in Halifax, it will make challenging conditions today. Leeds had 11 virtual mascots from Beeston Primary School.

When Dallas stumbled in the first minute and then Llorente playing number 14 slipped, it wasn’t looking good for playing on the new pitch as it looked wet. I’m not sure if it was watered before the game or not, but on seeing us unable to keep our footing, it would be an own goal in my opinion. Bielsa made a change to the formation with Struijk on the left-hand side of our defence and Llorente on the right. It looked like we didn’t have anyone specific in Phillips’s role today with Harrison starting on the right wing and Raphinha on the left. With a good early chance, Bamford passed the ball for Roberts in the penalty area, but he was unable to reach it. Southampton looked dangerous when they got a free kick and although their player got to the ball from the cross and headed wide, hopefully Struijk did enough to put him off despite being blocked in the build-up. Meslier made a crucial save after they sent Cooper the wrong way and got a shot in. We made a few bad passes, but I was sure we would settle down.

Raphinha’s free kick saw four of our players getting past the defence in the penalty area but the flag was up for offside. It was a correct decision but also good to see them all trying to score. It was hard to know who was playing where at this moment. Llorente showed his class with a great ball to the opposite side of the pitch. The longer the game went on, the more concerned I was about the state of the pitch. For the money spent on it, have we been sold a dud? It was very slippy for both teams and looked to be cutting up in places. Although the weather may have impacted on the pitch settling in, that wasn’t a good sign for me.

We saw some good defending from Ayling before Bamford was unlucky, getting pushed off the ball at the last minute in their penalty area. The commentators were doing my head in and is why I want to be there at the games, so I don’t have to listen to them! We did keep giving the ball away a lot which worked in favour of Southampton before we changed formation with Raphinha back on the right wing and Harrison back on the left. Leeds should have taken the lead shortly afterwards after fantastic work from Raphinha saw him pass a great ball to Roberts in the middle of the pitch, only to see him blast it over the top. That was a bad miss and in reality, he should have at least got it on target. Roberts was on the receiving end when he was brought down, which earned their player a booking for the foul. Even though we were a bit too far out to score, Raphinha sent a great ball to Llorente on the right with Dallas on the receiving end of his pass, who brought a save out of the keeper.

Meslier made a great save but the referee gave Leeds a free kick for hand ball. The next minute Southampton were awarded a penalty after Llorente caught their man. When replays showed that he had not fouled their man, Kevin Friend in charge of VAR asked the referee to look at it again. On seeing the replays, the referee changed his mind which was the right decision. A brilliant ball out of defence from Dallas to Raphinha looked as if he was set to score but the ball was whipped off his toes in the penalty area. My first instincts were that it was a cast iron penalty and sending off, but it just shows what happens when you see it again, as it proved to be an excellent tackle. Llorente gave the ball away but then struggled to get going again on the pitch which was a concern but luckily all was okay, and we cleared it. The ball had to be changed just before the break so hopefully that will benefit us. Cooper tried to shield the ball out, but Southampton got it but then he recovered to win it back. Southampton got the ball into the net, but as they had taken the free kick before the referee had blown his whistle, it was disallowed, and play brought back. Southampton came the closest to scoring from a corner which brought a save from Meslier as the ball swung in dangerously. With the score 0-0 at half time, it had been quite an eventful half.

Costa replaced Harrison for the start of the second half which turned on its head very quickly. This meant Raphinha was back on the left wing again. After a good block from Struijk and a save from Meslier, Leeds took an early lead. A great pass from Roberts to Bamford saw him run forward, hit a low shot from just outside the area and into the net for a great start. Southampton tried getting straight back into the game which brought another save from Meslier. Leeds should have got a second goal after another amazing run from Raphinha, but the final shot was inches wide from Roberts. So close and a shame he didn’t bury it. We nearly scored again after a great clearance from Ayling saw Raphinha run to the other end, pass the ball to Dallas before Bamford saw his shot then the follow up from Roberts, both saved by the keeper. Costa won a corner and once cleared with Southampton on the attack, he raced back to win the ball back and was brought down in the process. Some good defending from Cooper ended with Klich down in our penalty area so we put the ball out. Southampton made a double sub as Alioski came on to replace Klich. With that, Alioski went to left back and Dallas moved into midfield.

Alioski nearly went flying when he tried stopping himself running forwards. Some great play from Leeds after a pass from Alioski to Raphinha then Llorente, brought a save by their keeper Alex McCarthy. To say he was on loan at Leeds one time, I can’t even remember him being here.  Some fantastic defending on the line from Bamford made sure the ball was kept out even though Meslier was behind him. Better to be safe than sorry. A free kick awarded against Alioski was wrong as he didn’t touch him, their man was already falling down when Alioski kicked the ball away. The pitch was looking quite dangerous with the number of times players were slipping on the surface with Dallas one of them. As their player started walking off the pitch injured, he then went down to waste time for their sub to come on. Meslier saved another long range shot but then as we got it away, they won it back and shot over the top, but it was offside anyway. Hernandez replaced Roberts with just over 15 minutes of the game left.

Costa made a run down the wing and sent a great pass to Dallas who hit his shot through three men and past the keeper into the goal to give us a two-goal lead with little over 10 minutes of the game left. Praise should go to Raphinha for his great run across the goal which created space for Dallas to get his shot in. Dallas held up a shirt after he scored with the name of Granny Val on, in memory of Phillips’s grandma who died last week. Southampton were still putting us under pressure when they could and got through, although their player didn’t know much about it when his shot forced a save from Meslier. Leeds counterattack ended with Costa fouled but the free kick awarded was in a good position. A brilliant free kick from Raphinha straight into the bottom left of the goal with the keeper beaten saw us take a three-goal lead. As Raphinha took his shirt off to show some writing on his shirt it earned him a booking. I don’t see anything wrong with taking your shirt off to celebrate anyway. Raphinha who was to be crowned man of the match again, ran to close their keeper down which is the Bielsa way despite only a few minutes remaining. That is just what I want to see, Leeds battling until the final whistle blows. Our formation was changed today and ignored the normal Phillips role so well done Bielsa as it proves he listens. Even though it took a while to get on top and there were some hairy moments, it worked. The last minutes saw Raphinha keeping the ball in play with his great pass to Alioski with the final shot from Hernandez over the bar. An excellent three points sees Leeds climb to 10th in the table setting us up nicely for Saturday’s game against Aston Villa. LUFC – Marching on Together!