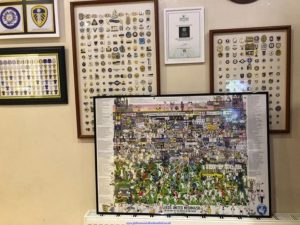 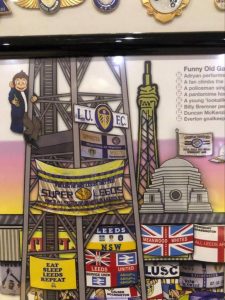 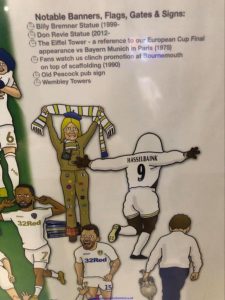 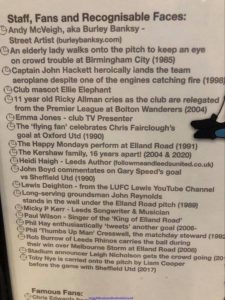 After the heavy snow yesterday and rain since, we will see how our new pitch holds up. A minute’s applause was held for 100-year-old Captain Tom after his death yesterday, who raised nearly 33 million pounds for the NHS. After Southampton were beaten 9-0 yesterday, Leeds went up to 11th place as that affected their goal difference which was inferior to ours. Rodrigo has been for a scan and hopefully his injury isn’t too bad thus giving Klich his chance to play today. Raphinha had recovered from his thigh injury to retain his place in the team.

Leeds nearly caught Everton out after a quick throw in got Leeds into the penalty area and won us an early corner.  From the corner they cleared the ball to one of ours but instead of pushing straight back with an attack, the ball went back to Meslier and the chance was lost. The new pitch looked to be holding up well in the early stages of the game, but we were slipping and sliding a lot.  Everton were not so it must be down to the studs our players have on their boots.

Everton had a great run down the wing where they managed to get a good cross in after beating Raphinha. Struijk was at the near post but the cross reached the man behind him all on his own with only Meslier to beat, to give Everton an early lead. You had better not be cheering Mr Pope! A minute later Meslier had to make the save to prevent them getting another goal. Leeds immediately tried to hit back and a great shot from Klich was put out for a corner by the keeper.  As Raphinha was stood waiting to take the corner he couldn’t as the linesman stood in front of him preventing him from taking it, as VAR was looking at something. Harrison was booked for a foul, but I didn’t think it warranted a booking. Leeds had another good move, but Bamford’s header went over the bar. Some nice play from Bamford saw Leeds win another corner where a brilliant first-time strike from Alioski brought another save from the keeper. Leeds continued with some sustained pressure but then Everton tried getting back into the game and always looked dangerous. A great free kick from Phillips saw a Struijk header deflected by their player and saved by the keeper. Leeds continued to win lots of corners as they tried getting back into the game, but Everton were always a threat going forwards and brought a further save from Meslier. They were also pulled up for offside in an attack, but I didn’t think it was.

There was some end-to-end football with each team closing each other down. The pitch was definitely slippy but it was not cutting up like it had been doing which was good to see. Some nice play saw Bamford cutting out their pass, but he was quickly closed down. Everton were through again with a man spare, but they shot instead which went wide. Three minutes from the end of normal time in this half saw Everton increase their lead. They scored from a corner when they headed the ball on to their man at the back post who had lost his marker. Everton had another free kick in a dangerous place but Leeds cleared the ball. Although we were losing by two goals, the game is not over yet as Leeds can still fight back.

At the start of the second half, they did exactly that as Leeds pulled one back within three minutes when Raphinha scored after good work from Harrison and Bamford. The ball seemed to run for Everton where they put in another dangerous cross although Leeds won the resulting thrown in. Leeds were then very unlucky not to get an equaliser when we had two chances saved on the line first from Klich, then Raphinha, before the keeper made another save from Harrison. Their keeper is having a blinder here. Leeds were forced to defend a free kick before Everton ran through us again but their final shot was wide.  Leeds were not giving up and made our first sub with Roberts coming on for Klich. It was a very fast paced game as Leeds still had to defend when Struijk battled with their player on the wing to put the ball out for a throw in. Some more persistent play from Bamford saw the ball just over the crossbar.

It had been all Leeds this half but Everton were always looking dangerous on the break which brought some vital defending from Cooper. Alioski looked like he couldn’t keep on his feet, but the ball was maybe too far in front of him. He was then taken off with Hernandez coming on to replace him with Dallas going to left back. Ayling then found himself in the book. As their player was being subbed, he was time wasting, and the referee had to tell him to get off the pitch quicker. As he should have gone off the other side of the pitch, why was he allowed to dictate this? I hadn’t given up yet as there is always time until the final whistle blows. Everton got through again through sheer persistence but Meslier caught the cross easily. Leeds weren’t playing badly so there was still a chance as that never say die attitude meant we were still attacking. Harrison won a corner which I thought should have been a free kick to Leeds for a foul, then Roberts won a free kick in a similar place to the left of the goal. As Everton cut out Hernandez’s pass there were three of their players through bearing down on our goal but Meslier was quickly off his line and blocked their attempt as we came away with the ball. That was always going to be a danger with us pushing up for an equaliser. I couldn’t believe how quickly the game had gone past but it had been very entertaining. Harrison was replaced by Costa as we tried a final push to get a goal back. When Everton pulled Raphinha back they were very lucky as they were so close to doing it in the penalty area. With five minutes injury time on the clock, Leeds continued attacking and some great play saw Ayling’s shot career off their player off for a corner. An excellent cross from Costa saw Everton clear the ball and although it felt like a goal for us was not going to happen, you never know. I think you could tell that Hernandez hadn’t been playing for a while as he just wasn’t sharp enough at times, but it was good to see him getting some game time. As the whistle blew for full time it was hard lines Leeds as they had played well and never given up. With our next game not until Monday against Crystal Palace, we have a bit of a breather now.

My little grandson Freddie made the programme today too. 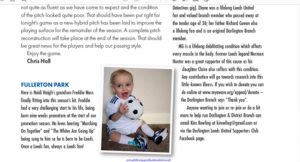 Having just received by Leeds United mishmash from Alex Bennett @footymishmash on Twitter, I’m proud to say I made the final publication. It’s good to see although I have no idea where I am going to put it!  LUFC – Marching on Together!