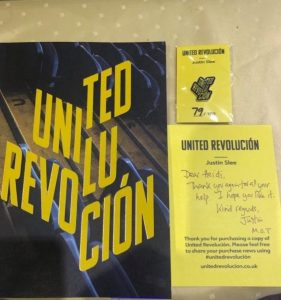 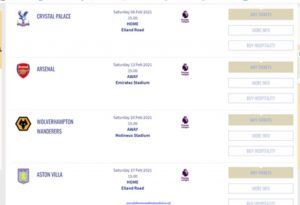 It doesn’t seem two minutes since I was travelling by train to London after work to the FA Cup game. Timing was key to getting there at all, but everything worked liked clockwork before getting back at 3am and going into work four hours later. The things you do to support your team.

I thought I’d definitely lost my marbles this week. Even though I was convinced that Leeds were playing today Sunday, I checked the official website and the fixture was down for Saturday. I was geared up for that only to find out I was right in the first place when I started reading what other fans were posting. Having just taken this screen print, I am pleased to report I did not imagine it which is a relief!

I have just received my United Revolución book from Justin Slee which has some great photos in it and I’m looking forward to reading more later. Thank you to Gerry Johnston for allowing me to appear on his show after the game today and am looking forward to chatting to him again in future.

Team: Meslier, Cooper, Ayling, Dallas, Struijk, Alioski, Bamford, Raphinha, Harrison, Klich and Shackleton as Phillips was out due to injury. Subs: Costa for Harrison and Roberts for Klich (45) and Huggins for Alioski (53). Subs not used: Casilla, Cresswell, Davis, Hernandez, Gelhardt and Jenkins. Leeds lost the game 4-2 with Struijk (58) and Costa (68) getting the Leeds goals after being 4-0 down. Attendance: zero – behind closed doors. Referee: Stuart Attwell.

My heart sank when I saw that Struijk had been moved out of his strongest position in defence into Kalvin’s role, with Shackleton brought in at right back and Ayling moving to centre of defence. To me we would not play to our strengths with our players being out of position and shouldn’t have changed the back four when we knew it was working.  I may not agree with the decision but as I always say, Bielsa has to do it his way.

Arsenal were immediately on the attack but their first couple of chances were way over the bar, but it was a sign of things to come. Although a good cross from Harrison brought a header from Bamford which was saved by their keeper, the game turned on its head two minutes later. A ball out of defence was picked up by Arsenal and they ran at us down the left-hand side and Meslier was beaten at the near post to given them an early 13th minute lead. They managed to shoot between Ayling and Cooper when it looked like they were going to shoot in the opposite corner. That London voodoo strikes again.

A good piece of play from Leeds ended with Klich’s shot way over the bar as Leeds stepped up a gear. A great pass from Raphinha to Harrison saw their keeper gladly catch the ball. It was obvious that our formation was not working when Arsenal more or less walked through us and we had to be thankful that Ayling’s deflection put the ball over the bar for a corner. With the half hour mark upon us we needed to change what we were doing. Arsenal were forcing us back and Meslier came close to seeing the ball whipped off his feet as he cleared it. I wasn’t thinking of any subs coming on only changing our formation, but it felt like Bielsa wanted to get to half time before making any changes to the team but that was to be our downfall.

With that Arsenal were awarded a penalty on 33 minutes after a Cooper challenge. I thought that their player went down easily as my other half thought it was definite penalty. As it was, VAR overruled the decision and we had been given a lifeline as Leeds went on to win a corner. Sadly, we couldn’t beat the first man as they cleared it. With only 28 percent possession for Leeds this half we had been up against it, but things got worse when we were forced back even though I screamed for us to pass the ball forwards. Meslier stumbled when the ball was nearly whipped off his toes and with his second try for the ball, caught their man too. This gave Arsenal a two-goal lead as this penalty sent Meslier the wrong way with 40 minutes on the clock. In reality, we had been chasing shadows this half as Arsenal continued to make it look easy.  They were queuing to put the ball into the net as Meslier was beaten at his near post and Leeds were 3-0 down on the stroke of half time. It had certainly been a bad day at the office so to speak but I was adamant we should have changed our formation earlier. Let’s see what the second half brings, it will either be a fight back from us or annihilation. At this moment, I couldn’t see us getting anything out of this game but was happy to be proved wrong.

As I thought Hernandez may come on for Alioski I was wrong. Instead, Costa and Roberts replaced Harrison and Klich. The second half saw us get off to a disastrous start as Costa wasn’t strong enough to keep the ball and the next thing the ball was in the net and Leeds 4-0 down. Well, we certainly do things in style.  Leeds weren’t totally down and out though as they brought some pride back to the team with some fight still in there. A great shot from Raphinha brought a save out of their keeper before another attack won Leeds a corner. A powerful header from Struijk from this corner pulled one back for us. Arsenal were nearly through again attacking our goal with Raphinha chasing back from the halfway line, but our defence broke it up. That’s the good thing about this team, they never give up fighting. I’ve no idea what happened to Costa as his mouth was bleeding but it maybe fired him up as he scored Leeds a second goal after a good run and cross from Roberts down the wing.

Struijk was booked but even when watching the replay, I couldn’t see why. Someone will enlighten me in time no doubt, but Arsenal had lots of space on the wing since Alioski went off. Bamford was unlucky when he made a great run down the centre of the pitch and was crowded out in the penalty area. He deserved a goal for that run. The woodwork saved Leeds from another Arsenal goal from the counterattack and still looked dangerous going forward. Arsenal looked like they were going to score another goal, but the ball hit the post and rebounded as Leeds won a freekick for a foul on Raphinha. I was surprised their man didn’t get a booking as it was after ball had gone.  Even though we were losing I was still willing the ball into the net as we ended the half still fighting. Arsenal came the closest to scoring though, bringing out a good save from Meslier and were breaking away when Dallas fouled their man and ended up with a booking.

We did not disgrace ourselves in the second half, but the game was already lost by half time realistically. We will not win every game that’s for sure but need to fight back with the game at Wolves on Friday.  As this game is also still showing as a Saturday fixture on the official website, I will ensure I don’t take any notice of that one! LUFC – Marching on Together!